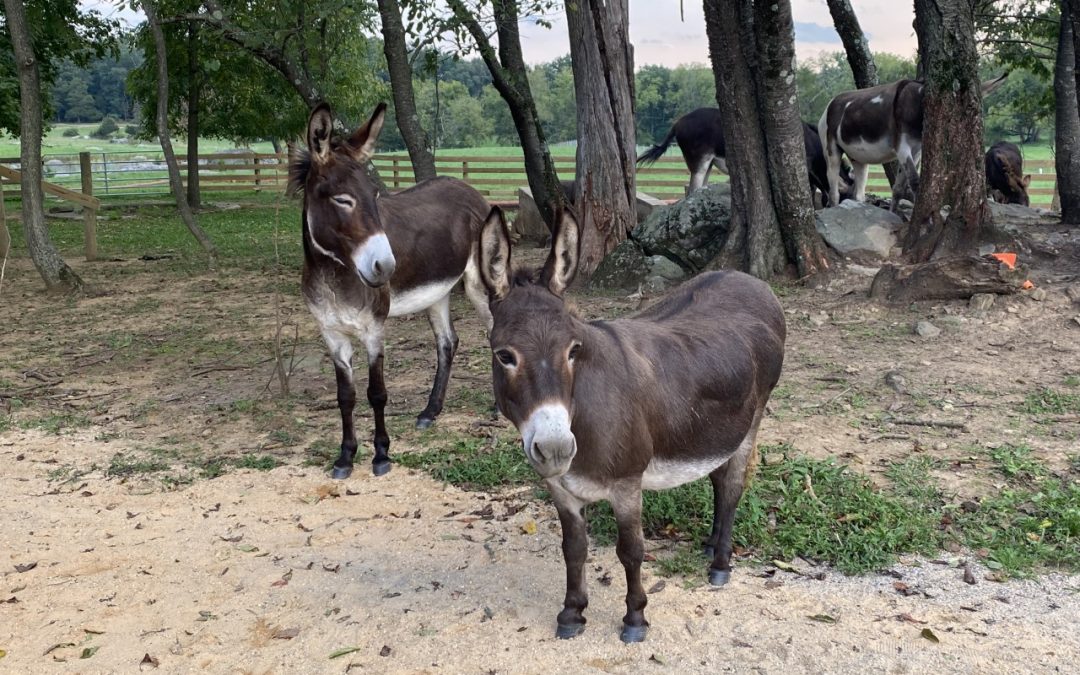 Cheryl Pokorny and Valerie Lowe started Little Longears Miniature Donkey Rescue as a rescue and sanctuary for miniature donkeys. And if you haven’t met one, it’s your loss. They are like big dogs. If they know you and love you, they’re just wonderful beings. I’ve met them and hugged them and I’m smitten!

Since becoming an animal communicator, I’m more focused on the importance of treating living creatures with love and respect. Because of this, I want to give you a chance to fall in love with Little Longears and the equine souls that live there, too. Just open your heart!

This blog is from an interview with Cheryl. It’s been revised for clarity and brevity.

Donkey rescue sneaks up on them

We got into this without any donkey background. I was a public high school teacher for many years. And Valerie had been a professional horse trainer. As a trainer, she was in the horse show world and travelled all over the country.

When we met, we bought a small horse farm in Maryland to retire some of her show horses there. I thought it would be fun to get a couple of little miniature donkeys. Just kind of popped in my head.

I said, “Hey, we have all this space and a beautiful barn. Let’s get a couple little donkeys to keep the horses company.” So I found two donkeys who were bought at an auction. Now that we had Nestor and Sassafras as pets, we started researching more about donkeys and auctions.

When we began, we found most of our donkeys at auctions. There’s a huge network of auctions all over this country for horses and donkeys that are slaughter bound. They are sent to Mexico or Canada because you can’t slaughter in the US.

They slaughter them for meat, or with donkeys, it’s mostly for their hides. Unfortunately, this has become a huge worldwide problem with donkeys. There’s the Traditional Chinese Medicine thing happening now in China where they’re basically decimating the donkey population for their hides.

But they’re very needed in many countries as working animals. And as the donkey hide trade expands, these working animals are stolen from family farms and taken to be slaughtered for their hides. So it’s become quite an issue in these other countries.

[If you’re interested in helping equines in other countries, Cheryl recommends Brooke USA. This charity helps working horses, donkeys and mules worldwide. They have a high rating from Charity Navigator.]

Donkeys surrendered by their people

These days, the vast majority of our donkeys come as owner surrenders. As more people heard about us, we received calls from folks who could no longer care for their animals. That’s because donkeys can live for 40 years, so they’re outliving their people.

These people didn’t know what to do. They’re aging and no one else in their family wanted the animal. But they don’t want to send them to an auction because they love their animal.

However, it’s not like you can just call up the humane society and say “Hey, will you take my donkey?”

So we provide a soft landing for a lot of these animals.  As you can imagine, this has been a huge comfort for so many people.

They’re like big dogs. For example, they’re super loving and social and friendly. If you haven’t met a donkey, you really need to. They are the kindest, most gentle, loving, introspective beings on this planet.

You know, there are so many myths about donkeys! For example, that they’re mean; they bite and kick. Plus, they’re stubborn. All of those myths are so far from the truth that I don’t want people to say “See, those donkeys are mean, they bite. That’s what I’ve heard!” Because it’s so rare.

If you can, I would encourage you to spend time with them to help educate and dispel the myths out there about donkeys. 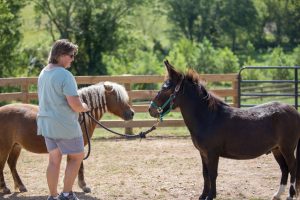 We have quite a few mules now, which of course is a donkey-horse cross. And we have some miniature horses that came with some donkeys – a mixed herd. Truthfully, we just couldn’t turn down the miniature horses. We weren’t going to discriminate just cause their ears were short!

A Zonkey joins the crew 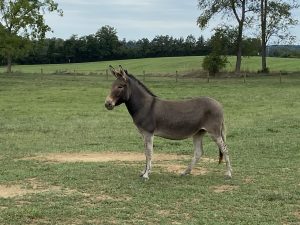 Oh, and we have one Zonkey! That’s a zebra-donkey hybrid. Someone definitely got in over their head when they got her!

That’s because zebras aren’t domesticated. In fact, her people didn’t even realize they had a Zonkey. But they couldn’t do anything with her. She jumped fences and wouldn’t let people handle her.

So we took her in! Currently she’s decompressing as she enjoys her mule, horse and donkey friends!

Maribeth: You know, with the time I’ve spent with you, what came across first was your commitment to never hurting or forcing animals. You allow these beautiful beings decompress on their own time. They have choices and move at their own pace.

We don’t set an agenda for anybody here. We’re not in a rush with anybody. If someone takes a month to let us touch them or love on them or 10 years… that’s up to them. We do what we can to help them feel comfortable and safe and loved. But there’s no timeframe. We joke that everything’s on donkey time.

Mule time is even more different. As in, they’re slow, very thoughtful, cautious beings. They think things through very carefully. They won’t be pressured into doing anything they feel is unsafe.

That’s why they’re perceived as stubborn. Because if humans try to make them do something faster than they’re ready to do, that scares them. Then plant their four little feet and shut down. You can’t move them.

At that point, we take a deep breath, and let them move at their own pace. When they feel safe, they move on.

From Maribeth: I’ve done my research and I don’t want to give money to people who are holding animals – I’m going to say the word – captive- solely to make money off them. If the animal’s welfare ain’t “Number 1,”, I don’t want to support them financially. Before I contribute, I look for accreditation and/or their Charity Navigator rating. So I’m thrilled Little Longears is accredited.

Little Longears is accredited by the Global Federation of Animal Sanctuaries.

It’s a huge milestone. This accreditation isn’t just a donkey thing. The Global Federation covers all types of beings, and we’re proud to be a part of that. They set a higher standard of care, knowledge, and how the organization operates.

A philosophy of ethics, love and care

We just moved from a 15-acre farm to 100 acres of magical, magical sanctuary. There’s space to grow.

Our goal goes beyond taking in animals just to throw them in a pasture. In our past, we’ve had to rescue other rescues. They may have started well, but their animals didn’t end well off. From that experience, we decided we never want to be like that.

You know, these donkeys have been through so much. We want them to know they’re safe and going to be cared for the rest of their days. That’s whether they stay in our sanctuary or get adopted into a loving home.

How can we support donkey rescue?

Financial support is the best. Monetary donations help pay for hay, straw, grain, the vet and the farrier. To keep these guys well trimmed, our farrier is here every week.

And we need regular volunteers! We’re in New Oxford, Pennsylvania, not far from Gettysburg and Hanover. So if you’re local, we’d love your help!

Finally, some people like to donate blankets, treats, or toys. There’s a wish list on Amazon for people who want to buy tangible things.

Little Longears is a registered nonprofit charity dedicated to the rescue, rehabilitation, and safe sanctuary of abused, neglected, or otherwise unwanted donkeys. They provide a haven for people to surrender their donkeys when they’re no longer able to care for them.

After veterinarian, farrier, psychological, and training needs are met, Little Longears’ goal is to place adoptable donkeys into permanent loving homes or if not, provide permanent sanctuary.

Have you spent time with donkeys? I’d love to hear your experience.