Helping a man say goodbye to his dogs before his transition

I work with animals who might be ready to transition.

Their people want to know whether they are in pain. They wonder if they are ready to go. If they are ready, I assist people in telling their animal how and when the event is going to occur so it’s an easy transition. 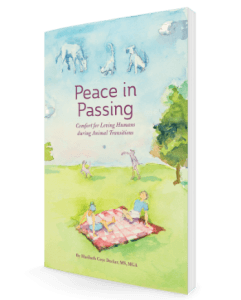 I wrote a bestselling book to help people on this painful subject  – Peace in Passing: Comfort for Loving Humans during Animal Transitions.

This time, though, I had a different opportunity – to help two people say goodbye to their animals before the PERSON passed on.

I had not thought about how it might be hard to leave your animals without being able to say goodbye to them.

Richard (not real names) had a stroke before Christmas. He was in the hospital in a coma. His wife Missy brought the two dogs to say goodbye to Richard.

But Missy wasn’t sure the dogs understood that Richard was not coming home.

Was there a way to say farewell when the person was passing on?

With Missy’s permission, I had a session with Richard and the dogs. Sessions are intuitive and remote.

I’ve found that I can contact people in comas. This is because their spirit is still alive even if their consciousness is shut down.

During our session, Richard told the dogs he loved them. He let them know he’d be back in spirit to visit. He also let the dogs know that Missy was in charge now. He had been the guy in charge of them when he was well.

Richard passed away about an hour after the session. It was a great privilege to help that family.

Listen to the full story here.

Helping a man say goodbye to his scotty dogs