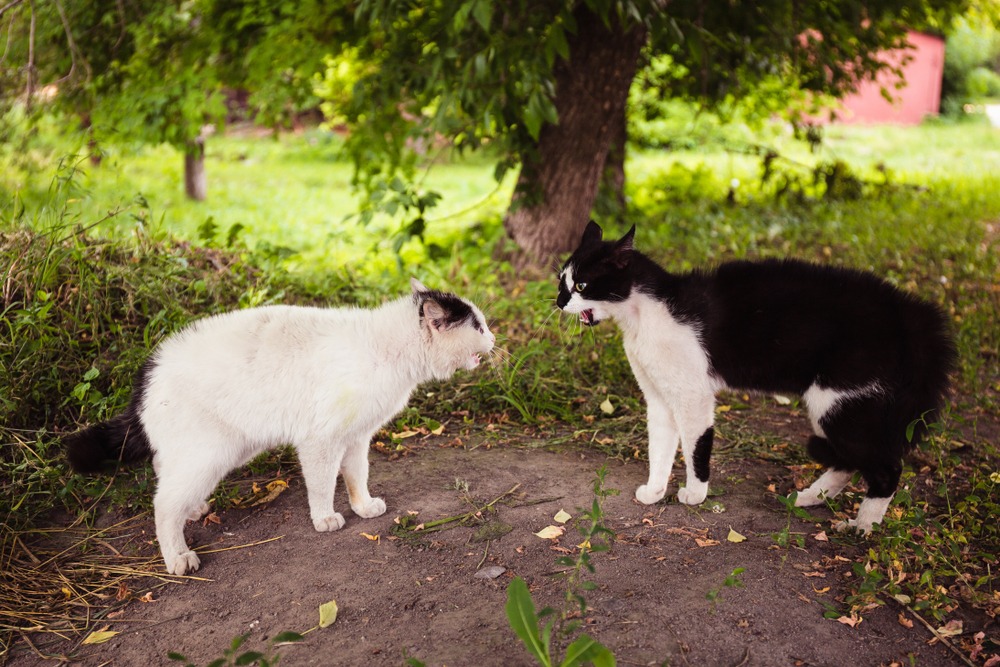 We had a cat crisis this week. I’m being a bit dramatic, but from a human standpoint, it was beyond awful. The actors in this crisis were Bunnie, my 11-year-old white cat and Shadow, my 4-year-old black cat.

Before the cat crisis – human interventions

Truth? They don’t get along and usually avoid each other. Sometimes they charge each other without serious damage other than scaring the crap out of me and my husband with the yowls. So we’ve learned to intervene. When they’re eyeing each other like it’s time for a Shootout at the O.K. Corral, my husband or I get between them and let one of them slink away.

I used my animal communication skills

I’m an animal communicator, right? So you KNOW I’ve talked to them about getting along; that we’re all family here. It has helped. But it’s still an ongoing problem.

Shadow, our younger cat, wants to play with Bunnie. But Shadow unnerves Bunnie and Shadow can feel it.

Bunnie wants Shadow to disappear from the face of the earth. Why? Because Bunnie was my husband Charlie’s favorite girl cat before he brought Miss Shadow home four years ago. Unforgiveable!

Before the cat crisis – doggie interventions

Sometimes my doggie Stella, steps in between them and says, “No way! We’re not having that here!” And they stand down. I think of Stella as a mini-Nana, the nanny dog for Wendy and the Boys in the Peter Pan story.

A couple of days ago, Bunnie and Shadow got into four screaming matches in one night! Loud screeches that simulated the cat version of thunder going off in our bedroom. Four times! This cat crisis created serious damage to our sleep time. It was definitely worse than a newborn baby crying in the middle of the night – I’ve dealt with that. Truly, we felt like the world might end as we jumped three feet off the bed every time a new screech erupted! Every time!

The next day, I had a serious sit-down animal communication conversation with those two. I told them again that neither one of them was going anywhere. They were stuck with each other for “as long as they both shall live.” Because we were completely attached to both of them.

I suggested that they stop attacking each other. Instead, they could play more to release the tension. Not with each other. But just play! Get the energy out of their system!

I always give animals an alternative behavior when I ask them to stop doing something. As I’ve heard, “Nature abhors a vacuum.” You’ve got to fill the old behavior with a new, positive  behavior

Results after the cat crisis were scary good

The next night, I exhaustedly slipped into bed with a reminder to each kitty. We humans desperately needed our sleep.  We’d be less grumpy if we had peace and quiet. No cat crisis.

I woke up at some point during the night to see Shadow sleeping on the bed just looking down. As I followed her eyes, I noticed Bunnie laying on the floor playing with a little red sparkly ball. Shadow was calm and Bunnie was happy.

The week continues to be quiet with no cat crisis kerfuffle. I plan to set aside time to play with both cats (separately) to help them release their energy. And keep praising them when they’re doing well.

Reading Aggression Between Cats in Your Household has given me some more good ideas. Maybe the problem isn’t solved yet, but getting a good night’s sleep? Priceless!

Musings of the Cat Formerly Known as Brick