Animals and Plants as People

More people are talking about treating animals and plants as people. I love this concept! Here are my reasons.

#1 Corporations are people; why not animals and plants as people?

Legally, corporations now have some rights that once were only given to individual human beings. In 2014, Nina Totenberg discussed this on NPR’s Morning Edition. She discussed “When Did Companies Become People? Excavating the Legal Evolution.”

In her discussion, Totenberg said, “Are corporations people? The U.S. Supreme Court says they are, at least for some purposes. And in the past four years, the high court has dramatically expanded corporate rights.”

So, a precedent already exists to give non-humans rights that were originally reserved for homo sapiens.

#2 Animals and plants as people – not a new concept

Native peoples of America and other indigenous groups around the world have long viewed other living beings, both animal and plants, as persons. And they’re communicating their viewpoints into organizations, articles, and the courts.

Boyce Upholt wrote a great essay for Emergence Magazine, Saguaro, Free of the Earth. He shares,

“How we fare in the coming years seems to increasingly depend on how willing we are to collaborate—with one another, and with the world’s many other beings. Now, then, may be the time to bring our own laws in line with nature’s.”

And Lorraine Eiler of the Hia-Ced O’odham people, shares her people’s beliefs about the Saguaro Cactus as “more than human beings” in Rights of Nature at the Border. Eiler shows us how climate change and the border wall adversely affect the oasis, Quitobaquito Springs in the Sonoran Desert.

As I said earlier, groups are taking legal action on behalf of animals’ rights “as if” they were people. For instance, the Sauk-Suattle Indians sued Seattle on behalf of the salmon, who are struggling because of dams blocking their passage up local rivers.

Animal rights groups are also asking the courts to give animals rights to what I would call “life, liberty, and the pursuit of happiness.” In 2018, the Animal Legal Defense Fund* filed a lawsuit in Oregon for a horse aptly named Justice, who was badly neglected, resulting in starvation, frostbite and other serious maladies. Yeah, they were suing on behalf of the horse! Read Justice the Horse Sues Abuser.

*The Animal Legal Defense Fund gets a 4 -star rating from Charity Navigator.

#3 We already love our animals as people

At least I do. And if you’ve worked with me or read some of my stories, I’ll bet that you, too, already see your own animals as people. And maybe you already talk to your favorite plants. I sure do.

#4 We benefit when we view animals and plants as people

I find life much more interesting when I treat all living beings as sentient. With this mindset, I discover a greater capacity for compassion for all living beings, even humans I disagree with! (I’m working on the human one, though.)

And when I think of the health of the planet, I imagine what the Brazilian Rainforest would say about whether it wants to be burned down to make way for cattle farming. My guess is it’s a no, thank you. If the Rainforest could speak, I imagine it might say,

“My purpose is to help the planet breathe and to be a home for so many species I love. I’m not here to ensure that every human gets as many burgers as they want.”

We humans tend to get into either/or thinking on so many subjects. But we also have a Creator-given capacity for out-of-the-box creativity.

What if we connect with animals and plants with our hearts and imagine them as people we care for? Then maybe we can find a win-win solution for humans and other living beings. One that allows them and the planet, to thrive. Read my blog, 10 things you can do to increase kindness to animals. 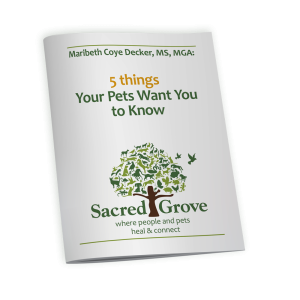 Get my free PDF, “5 Things Your Pets Want to Know”!