Alexandria has a real Dr. Dolittle! 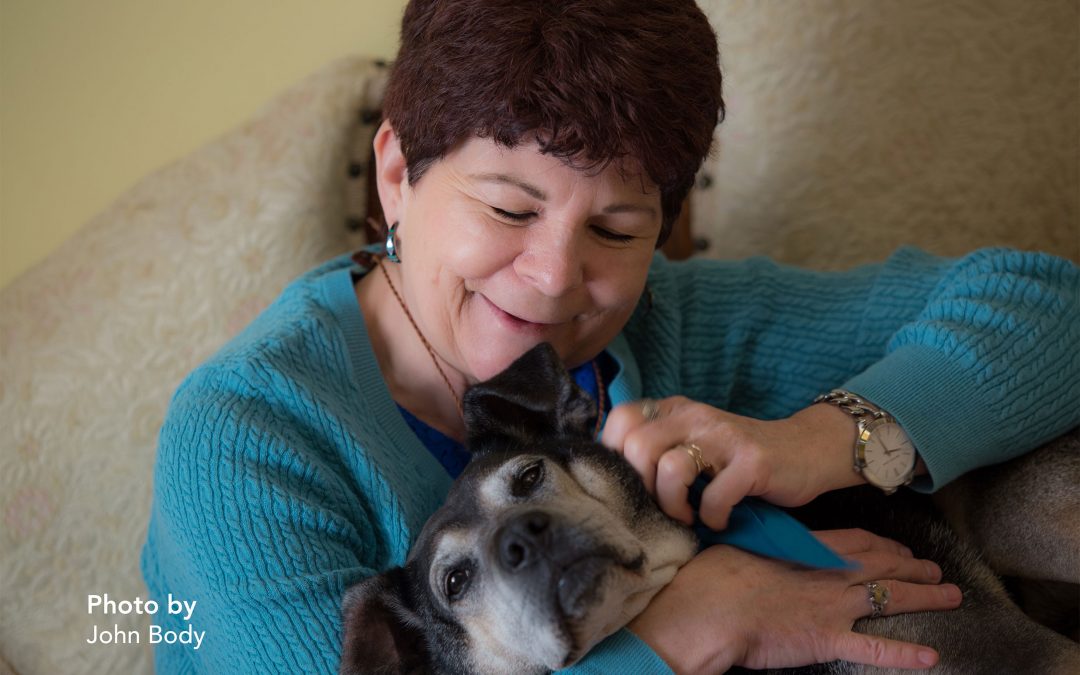 Have you seen the Dr. Dolittle movies?

You know, the ones about the veterinarian that can talk to animals? I loved those movies! Eddie Murphy and Rex Harrison were both wonderful Dr. Dolittles. Truthfully, I was a bit bashful to see the title of the article in The Zebra Press proclaim “Alexandria Has a Real Dr. Dolittle!”

The Zebra Press’ Semmes Zazzara and I chatted about how I became an animal communicator and why people want to “talk” to their animals. Plus, Semmes recounts my animal communication session for her son’s dog, Taco.

Alexandria Has its Own Dr. Dolittle

Are you an owner or a guardian?

In my interview, we discussed the use of the word, “owner” when talking about our animals. I still slip and use owner, but I don’t love it anymore. Lawyers will tell you (correctly) that animals are considered property, at least in my state. But if you want to communicate – seriously communicate –  with your animal, starting from a place of mutual respect works wonders.

That’s why I prefer the term “guardian.” Good guardians care deeply for their charges. They have a serious commitment to their  animal’s best interest. I’ll bet you’re a guardian no matter what word you use! I’d just like to hear people use “guardian” – or “companion” more often to acknowledge their love and respect.

“If you talk to the Animals,they will talk with you.And you will know each other.If you do not talk to them,you will not know them.And what you do not know you will fear,what one fears one destroys.”

(Thanks to MaryNance  a client and wise woman – she sends out inspirational quotes daily. Maybe you read about her cat Samson in my Chinese New Year blog?)

Reprinted with permission from The Zebra Press, November 2017

Just like an infant, a pet is unable to speak to us.

Our pet cannot verbalize when it is in pain, or wants to go outside or is hungry.  But, also, just like with an infant, we learn to interpret the behaviors our pets exhibit, just as they learn to interpret our actions.  Have you watched your dog run in circles and get excited about going for a walk just because you pick up the leash?  Or how you know to let your dog outside when he or she is dancing by the back door?  So that’s an easy one.  It’s probably obvious that I’m a dog person but I’m sure that cat owners have plenty of telltale signs from their cat friends as well.

But what if your pet starts exhibiting unexplainable negative behaviors?

He is whiny or lethargic, or whimpering as if in pain but you can’t find anything wrong with him?  You take him to the vet but the vet says he is totally healthy.  Relief turns to frustration as you watch your beloved pet turn from a lovable bundle to a withdrawn and unhappy animal.  If only there was a way to find out what in the world is going on in your pet’s mind.

Maribeth is an animal communicator or intuitive animal communicator.  She prefers to call a pet’s human companion a “guardian” rather than an “owner”, as guardian seems more respectful and, as Maribeth says, “It’s time to move on and rethink our relationships with animals in this life.”

Maribeth says her ability to communicate with animals wasn’t something she had planned but that the ability is like a “great unplanned pregnancy”.  As a retired Naval Officer, she never expected that this would be her calling.  Maribeth is lucky in that she can turn off the ability to read animals so that she is not constantly bombarded with unsolicited communication but that she can choose when to connect with an animal.

Gus’ dog, Taco gets a reading 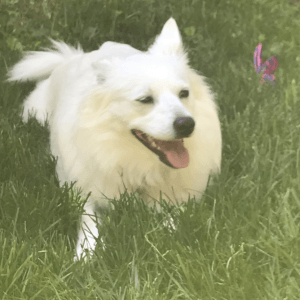 Once I heard about Maribeth, I contacted her for a reading.  Not having a dog of my own at the moment, I borrowed my son Gus’ dog – a precious female Eskimo dog named Taco, my first grand puppy, who just turned two.  Taco is a wonderful dog who had started to be very whiny and needy whenever she came to visit.  Maribeth does remote readings, meaning neither I nor Taco needed to be in the room with her during the session.  But she insisted I get permission from Taco’s guardian that he approved of the reading.  He did.

Prior to the phone consultation, I emailed her photos of Taco and completed a short registration on her website SacredGrove.com.  Setting up the appointment was simple, and the form only asked a few questions about Taco, her issues and other people who are around her.  I scheduled the time that worked best for me and at that time, Maribeth called me and the appointment began.

Her process is very thoughtful and respectful of both the human and the pet.  Even though her website has thorough information about the session, Maribeth began the session with more information to make sure I understood what to expect.  She explained that she is an intuitive and telepath and that at times during the call she may be quiet because she is listening and trying to figure out the best way to explain the information she is getting from the animal.

Maribeth asked if she could share anything she heard, even if it was negative.  She had learned to ask this question because once an animal she was reading told her some unpleasant information about its owner and the recipient of the information had not been pleased.  I hesitantly agreed to hear it all!  Maribeth also assured me that this was to be an interactive reading and that she wanted me to listen, react and share information with her.  This was not to be a “one-way download”.

When Maribeth was ready to begin, she spent a minute concentrating on Taco’s picture.  She let me know that Taco is a girly girl, which is true, and that she has good color around her.  Next, she told Taco that she would be connecting with her soon.

Maribeth then set the intention of the reading – that we would receive the maximum helpful information from the session.  Maribeth believes in spiritual entities who love us and are looking over us, but strives not to “step on any religious toes”.  Her goal is to create the most healing and beneficial experience for everyone.

Maribeth invited Taco to come into her office and told me that the way Taco comes in will give her an idea about how Taco feels about herself.  Once Taco decided to come into Maribeth’s office, Maribeth said Taco peeked around the corner and said, “Oh, s—, there’s a cat.”  At this, Maribeth laughed as one of Maribeth’s cats was sitting in the office with her.

Was this a real connection?

Keep in mind that Taco was with Gus at his place in Rosslyn and Maribeth was conducting this session from her home office in Alexandria while talking to me on the phone at my home in Arlington.  Trusting that Maribeth was actually connecting with Taco from afar seemed impossible, but it wasn’t.  The way she spoke of Taco, and other animals she has read, confirmed that she believes in what she is doing and in her ability to communicate with and heal these animals, and sometimes their guardians.  While she can read people, she chooses to read animals.

Her spiritual training is extensive, including becoming a Reiki master, a Certified Akashic Records Reader, a Certified Quantum Touch® Practitioner, and she is trained to perform Angelic Living Light Alignment.  But she is not out to convert people or convince them to believe in her authenticity.  She said that is just “a lot of energy expended in a direction that is not useful”.

Maribeth’s initial connection with the spiritual realm began when she was thirteen and had an impactful experience.  In the woods near her home, she asked God if he existed and she got an “incredible response from a loving, intelligent presence”.  The name Sacred Grove came from that experience.

When Maribeth connects with an animal she first quiets down her surroundings and clears her body and mind of thoughts and feelings.  When she is ready to connect, she has the sensation that a part of her head is “opening up” and then she knows she is ready.  That’s when she invites the animal to connect with her.  She has feelings in her body that reflect what the animal is experiencing.  In Taco’s case, Maribeth had an uneasiness in her stomach that told her Taco was experiencing some anxieties.  Once Maribeth sent healing love to Taco, Maribeth’s queasiness eased.

Maribeth said this gift has taught her to be less judgmental.  She sees things symbolically but understands that people use different tools to get information, whether doing an intuitive reading of people or animals.  “If it’s a good reading, it doesn’t matter how you get there,” she said.

Maribeth finds that meditating at least once a day and doing yoga are disciplines that are important to practice because they keep some of the “chatter” down and help her in communicating with animals.  She believes animals understand a lot more than we think they do, especially if we set the intention for them to understand, and that many times we actually are connecting with our pets on a deeper level but that we just don’t realize it.

Maribeth let me know that Taco was missing her dog sister Bink who had passed and wasn’t bonding well with the new puppy that had joined the family.  So Maribeth spent some time talking to Taco to let her know that Bink was in a good place and that she still loved Taco.  She also told Taco to give it some time with the new puppy and that they could become friends.

Lastly, she told me that Taco thought she had done something wrong and that’s why she didn’t get to come to my house very often anymore.  Maribeth shared with Taco that I adore her and miss her and that she hasn’t done anything wrong.  It’s just that life is keeping us all busy.  I plan to see Taco this weekend to see if she is less needy and will reconnect with Maribeth to tell her how Taco is doing.

In the end, Maribeth said Taco was very polite and that Taco thanked her for the reading.  I couldn’t help but appreciate that.  It was nice to know Gus is raising Taco right!

You can connect with Maribeth through her website SacredGrove.com where you can read her blog and success stories from the many animal lovers she has helped.  She is available for readings by appointment and has written a book called Peace in Passing: Comfort for Loving Humans During Animal Transitions.  Also check out her YouTube videos and Facebook Page.  Your four-legged family members will thank you!