If you’ve watched the show, the Big Bang Theory, Sheldon, Howard, Raj and Leonard could explain it. However, I’m giving what I think Penny’s explanation might be. 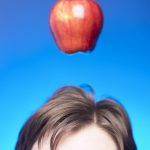 We’re used to the Newtonian physics explanation of the world – it’s a mechanical explanation. The apple falls off the tree, hits Sir Isaac Newton on the head, he says “oww” as he discovers AND curses gravity – then you see a bruise on his head. It’s a bit of a myth, but a good one.

Basically, it explains how one physical object interacts with another physical object. If we can figure out the rules, we can predict the results very accurately.

Most of the beneficial aspects of Western medicine can be explained by this model. But Newtonian physics does not explain the results of energy healing. 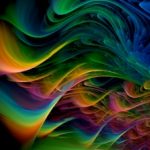 Energy healing can be better explained by quantum physics. Quantum physics wants to understand how the really small stuff works – subatomic particles less than 1/1000th of an inch.

Remember Einstein’s theory, which in my mind, says, everything is energy? It looks solid when it’s not vibrating very fast. But it’s still energy. As it starts vibrating faster, it becomes what we call energy. So when we’re doing energy healing on bodies, we are working with energy on energy.

Then we’ve got the unified field theory that says that somehow everything is connected by fields. The best example is how metal filings are affected by a magnet. Remember back in school when you put filings on a piece of paper and moved a magnet under them? The magnetic field moved them. Well, there are lots of different fields out there connecting a lot of things – -even if we can’t see them.

There are scientific experiments at Princeton University that show that scientists’ thoughts influence what will happen. If they think 4 subatomic particles will pop out of a random event generator (REG), that’s what they get. But when another scientist thinks there will only be 2 out of the same REG, there will only be 2.

Newtonian physics sees the universe and everything in it as elaborate machines. How can intent and belief influence machines? That doesn’t make sense. You have to let go of Newtonian physics if you want to understand energy healing.

And then there’s something called body intelligence. We all know the body is making decisions without our conscious control – breathing, circulating, adjusting a million small processes to keep us in the best health it can manage. That sounds pretty intelligent to me.

I have learned a technique that raises the vibrational level of my body. I use loving intention to direct the healing vibration towards another individual’s body.

Because I think the body has a desire to heal, I tell it that I’m giving it a gift of energy to help it heal. I explain that I am NOT forcing a healing; that the energy is to be used as it sees fit.

I believe that the increased vibration plus the body’s intelligence allows the body to heal itself. I am the catalyst. The body chooses what it wants to heal.

This doesn’t depend on proximity – I don’t need to be touching the body or even be close. I’ve had results with folks from South Carolina to Massachusetts. It depends on intention and vibration.

A friend at work, Rhonda , had jammed her finger a while ago and it still hurt days after being jammed. I held her hand in mine and “ran the energy.” She got a little worried and told me that the pain was increasing.

I reassured her that probably the finger was adjusting itself and the pain should subside once it made whatever adjustments it needed. After a few minutes the pain stopped. She reported the next day that the pain had gone for good.

These days, I focus my healing on the animals and I do energy healing for people to help them release negative emotions surrounding their animals’ behavior or health.

What can I expect during a session with Maribeth?