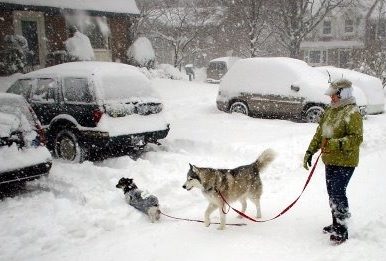 I think I’m supposed to talk about healing & death this month.

(Note to readers: I originally published this article February 2012. But it seems relevant in 2022, since we just let our beautiful, funny, loving dog Stella go this week. Mitsubishi was her first companion.)

So the New Year (2012) started out…well… not as I had hoped. Back to my hometown, Buffalo, New York in January for my good friend’s father’s funeral. Then off to North Carolina for my husband’s relative’s funeral.

And finally saying goodbye to a wonderful dog that had been a feisty and funny companion for 12 years – Mitsubishi, my Siberian Husky. That’s Mitsu, as I called him, in the picture at the top.

Even though death is inevitable,  I believe people – and our animals – survive as spirits. At times I feel their presence. Knowing that they are still “alive” even after their body dies, comforts me. But why the tears and anguish?

Why I cry about death

I cry for the ending of our physical relationship. The touch of soft fur, a cold nose. A phone call or visit from that friend or family member. A personality I love to live with, even when they’re a pain in the butt.

Death highlights what we will miss

When my father, Irv died in 1991, I realized that I had imagined a future with him that included joining me, my husband and my kids to soccer games, graduations, weddings, births, a trip to the grocery store or the movies. Sleeping on the couch while “watching TV.”

I felt picked up by fate and tossed into a new life, a new timeline, which was unwanted and unfamiliar to me – a life without my Dad.

Even when we plan our animal’s death because they’re not having fun anymore, we still feel all the “Nevermore’s”. No more walks, cuddles, calling them punks when they act out and know better, cleaning up after messy eaters or being maître d’s for those picky eaters.

We need to heal after death

We need to heal, to move on. Life asks us to do that – in our own way and own time. We don’t want to forget the person or pet, but we don’t want to permanently live immersed in grief. Here are a few suggestions to help you.

Talk to them to heal

Talking to the individual who has passed – talking out loud helps me heal. Of course, you have to find a private place if you don’t want people to think you’re crazy.

When my husband, Winston passed unexpectedly in 2008, I yelled at him. I did. The kids were in grade school. I huffed and cried, saying, “Just because you died, you don’t get to stop parenting the kids! You need to watch over them and keep them out of trouble. Point them in the right direction.” I am certain that he did just that. Not because i yelled at him (hah!), but that’s who he was. It was like we made an agreement, and I rested easier.

Saying it out loud brought me a lot of comfort. I invited Winston to continue parenting from beyond – and felt evidence of his positive presence in my children’s lives.

Telling our pets how much they mean to us and what we loved about them works just as well. In my work, I’ve asked dogs who passed to “train” the new dogs that joined the family. Show them how to get along with their humans. It was cool and seemed to help.

Invite them to visit

I invite my relatives to family gatherings – holidays, birthday celebrations, graduations – and trust that they show up. My pets get invites to visit me while awake and in my dreams, especially when I need a bit more love. And they are invited to be there when a new family member transitions.

I offer my condolences to those who are grieving.

Sandy in Kentucky (name/state has been changed) decided that although her kidneys were failing, she was not going to start dialysis.

Sandy found me online and emailed me about helping with her failing kidneys. At that point, she was in hospice care. She hoped to have a physical healing, but was willing to let life take its course.

We worked together on many issues: physical, emotional and spiritual. Although we did not succeed in a physical healing, we did see some wonderful changes in her family.

The healing came even though Sandy died

Early on, my mother and Sandy’s father (both had passed away) came to her in a dream. So at the beginning of each session, we invited them to participate. This was very comforting to both of us. I’m sure they were there when she passed.

Sandy’s mom  traveled a long way to be with Sandy, her sister and her sister’s infant daughter. Yet she was always yelling. Sandy reported that she had always been an angry mother.

Sandy and I did a meditation that connected the heart energy of each member of her family, moving that energy in a circle around the family’s hearts (Energetic Green Smoothie). We continued to hold this picture in our minds during each session.

Sandy reported that her mother stopped yelling, the household calmed down and became peaceful. This was the energy in the house when she passed away.

Sandy taught me that there are many ways for healing to manifest.

Need more ways to help you heal as your animal grows older or transitions?

Read my bestseller, Peace in Passing!