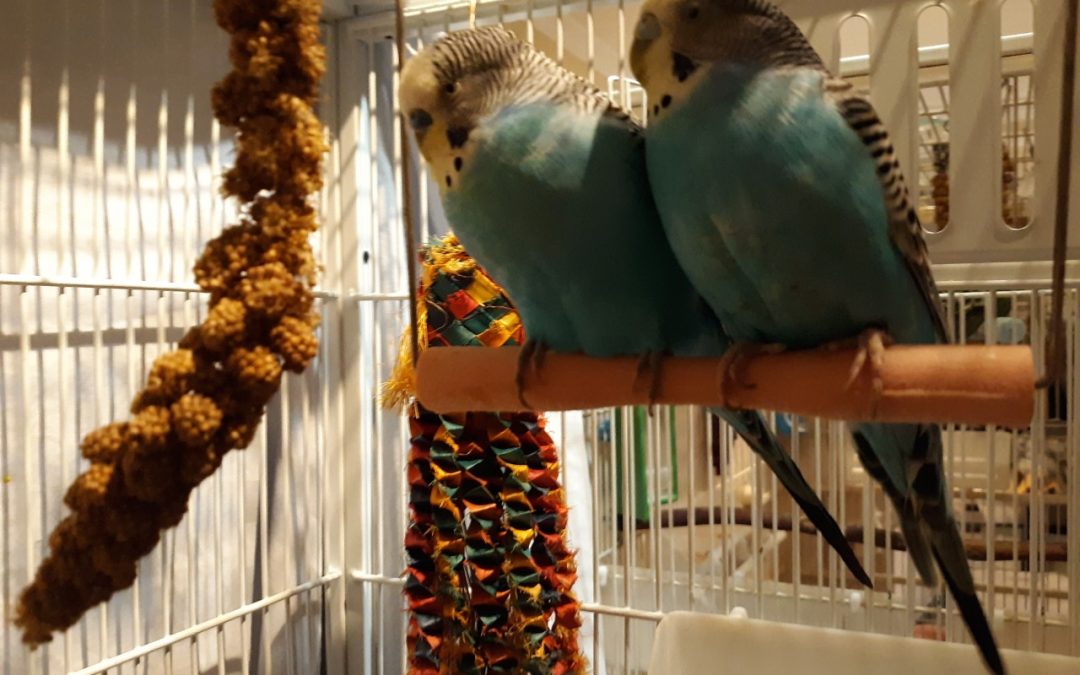 Introduction to Bird Transitions and Myths from Maribeth: I asked my UConnect animal communication class graduate, Erin Patricia Doherty, to share her wisdom on navigating end-of-life issues for birds.

Although I have worked with many birds, including Erin’s budgies/parakeets (as they are known in the U.S.A.), Erin has a deep wisdom about birds that she shares with us. 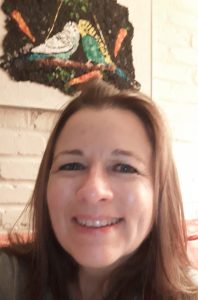 As an intuitive Reiki Master healer, who has supported birds facing anxiety or illness, I either help them enjoy life again or ease their transition. Bringing good energy around animals is key, especially when they prepare to transition. They need to know that it is okay to leave their bodies when life gets to be too much of a struggle. For this to happen, they need to be unencumbered by people’s sorrow or anxiety.

It’s important to be fully present and tune in to their pain levels in order to maximize their comfort levels. Anti-inflammatories, such as Meloxicam, might help early on, if the vet advises. Otherwise, I have given pinches of turmeric in their brown rice. Some of my birds wanted to use up their remaining energy to continue perching until they fall off. Others wanted to be kept warm by laying on my stomach. “Warm, dark, and quiet” was among the first mantras I learned for sick birds, long before I learned energy healing.

Protect birds who are ill from other birds

Birds also need to feel safe enough to not have to expend energy hiding their illness. They can and do hide it so well from humans and anyone else who might be perceived as a predator. However, they can’t fool other animals as easily.

Some alpha hens in particular pick on weak or sick birds. At worst, they may attack their heads with “finishing wounds.” Other fosters and sick birds who passed away in my care experienced my female bird Frankie’s aggression, especially when she was in breeding mode. Most recently, Miss Frankie beat Nickole up in her hormonal times.

When Frankie was aggressive, I worked to throw her off her game. For instance, I moved around toys and dishes and reduced the flock’s daily light exposure from 12 hours to 10 hours. I also separated her from the other birds when things got bad. And I replaced real eggs with Dummy Eggs to turn off her egg-laying hormones since she was more aggressive when she was in breeding mode.

If you remove the real eggs without replacing them, the hens will continue to lay eggs and deplete themselves of calcium. It is super-important to keep their calcium up with dark leafy greens and cuttlebones while they’re laying eggs. Otherwise, eggs do not form a hard shell and get stuck, causing potentially fatal egg-binding conditions. Per Using dummy eggs to stop your bird from laying more eggs,

“Every bird species [has] their own average clutch size. Hens are able to count exactly how many eggs they should lay! Hens will start building their clutch by laying one egg every other day. So, by providing her a full clutch of eggs, she will think she has finished laying all her real eggs. This is what signals her egg-laying hormones to turn off and she naturally stops laying more eggs.”

I’d like to dispel the myth that birds don’t grieve. I watched my own bird, Mister Henry, grieve for his mate.

Mister Henry paired off with the other Bluey, Nickole. They were inseparable. Nickole had a tumor that finally overtook her to the point where she was vomiting and turned her back to us all.

My hope is that my birds can pass peacefully at home, on their own. However, I sensed that we would likely need the vet’s help (euthanasia). During COVID, I was forced to hand the carrier over with Nickole in it, with Mister Henry for moral support.

It was crazy busy that Monday in March. So my veterinarian couldn’t immediately assess Nickole. When he delivered her prognosis by phone as I waited outside, I immediately knew it was time to help her over the Rainbow Bridge. Maribeth had already communicated with Nickole. Nickole conveyed to us that she was okay with leaving if it was her time. In the end, I was able to hold her as she took her last breaths and Mister Henry reluctantly said goodbye.

Even though he was there when Nickole passed, Mister Henry forgot Nickole was really gone. At home, he made the flock distance call to her and waited for her response. It is so heartbreaking when the departed bird does not answer. Listen to a Budgie flock call:

Energy healing for recovery of those grieving

When Mister Henry remembered that Nickole was gone, he refused to let my hands near him for a very long time. I sense that he blamed me for her being gone.

Eventually, I learned Reiki and added other active and directed energy healing. Mr. Henry responded positively. He finally let me push him on the swing and do other things without scrambling away from my hands.

Since I’ve been doing Reiki and other energy healing modalities, Mister Henry’s urate sugar is normal, and his droppings are less watery. He is also more active, vocal and happy.

I also play music with 528 and 432 HZ heart-healing frequencies. As the music plays, I envision the healing energy circling the birds’ hearts. I tell them more than once, “You are warm. You are safe. You are loved.”

Nightly Reiki rays are tremendously comforting to the birds, The flock’s well-being is evidenced by the fact that they close their eyes and do Contented Beak Grinding.  These birds are so pure that it takes less than 15 minutes of healing energy for the flock before they’ve had enough. I wish I had known Reiki or other energy healing modalities when Nicki and Nickole passed away.

Yes, Mister Henry would have probably healed from his loss. But keeping my own energy in a good place with self-care Reiki and channeling good healing energy to my flock enriches his and other flock members’ well-being.

When their quality of life is gone—and ultimately when they are too weak to fly and refuse water droplets offered on greens—I know that they are ready to transition.

Being so tuned into the birds can be difficult for me. That’s because I sense they are going to transition about a month before they do. As a result, I have had to consistently and mindfully manage my growing anxiety over that last month of life. This way, the animals are only receiving good energy from me.

Maribeth taught me in our UConnect class not to give negative energy, such as pity, to sick, injured, or dying animals. Instead, send good healing or comforting energy from a place of love. Keep the sad energy out of it. Show love and compassion.

I knew what Maribeth meant, but I still struggled to communicate clearly with the animals. It was not until I took Maribeth’s suggestion to use Reiki, not just for my own self-healing and that of other beings, but also to open my channel for better animal communication. It worked!

Before I knew it, I completed all three Reiki levels in rapid succession with a wonderful Reiki Master teacher. They were taught remotely because of the pandemic! I received my Reiki Master certification in June 2021.

No need to control or manipulate

I’ve branched out into more directed energy healing and medical intuition, some of which Maribeth also taught me. I addition to energy healing modalities, I learned to trust my intuition and ability to practice the work myself, rather than relying on someone else.

Some changes of behavior are more noticeable than others. For instance, Nicole turned her back to everyone on her last day on earth.

During his last weeks on earth, Mister Nicki went to the cage top and made a noise of discomfort.

Mister Nicki initially wanted to be kept warm but then got restless. He wanted to be moved to a low perch in his carrier (with the top off). I told him that I loved him very much.  It was okay to leave his body when living got too difficult. I spoke lovingly to him and said the very things that we had discussed in Maribeth’s UConnect animal communication class.

During the night, I heard a magnificent beating of wings and knew that my Mr. Nicki was transitioning. I miss him terribly but am always glad to have eased his transition. I am always relieved for the animals when they crossed over and are free from any pain or illness.

Forgiving ourselves for bird transitions

One thing I’ve learned is to not beat myself up for not knowing something that could have either saved a bird or increased his or her quality of life.

Budgies’ heartbeats are rapid to begin with, so stress needs to be minimized. In addition, they don’t have enough blood to safely do bloodwork. Therefore, caregivers and veterinarians have to figure out their health issues by processes of elimination and holistic methods.

After Mister Nicki passed, his daughter Cricket began to make similar noises to what he made in the night. The vet who saw Mr. Nicki didn’t pick up on anything physically wrong, except that Mr. Nicki was fading without huge distress.

I mistook Cricket’s noises for nightmares and tried consulting with another veterinarian to rule out physiological reasons. This vet suggested that it might be thyroid/early goiter, although she found nothing yet when she palpated that area. Birds have so little blood and get so easily stressed that we avoid blood work or surgery, choosing instead to treat things prophylactically.

When the veterinarian suggested iodine, I recalled adding a couple drops of liquid kelp, which has iodine, to the water. I had just forgotten why I had done it previously.  Wonderfully, in less than a week of adding liquid kelp to their water, Cricket stopped making that same noise I recalled her father, Nicki, making before his death.

I felt horrible for not knowing how to help ease Nicki’s discomfort, until I forgave myself during meditation times. I have committed to being a lifelong learner who is on a constant quest to do better. All I can do is move forward and do my best without dwelling on past lack of knowledge.