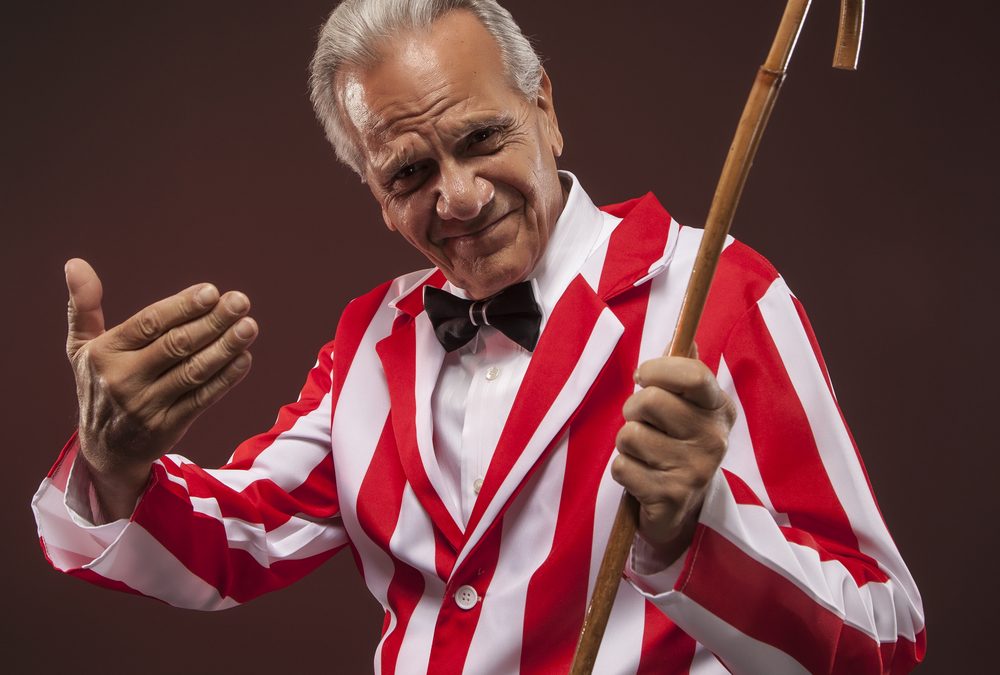 Read three curious animal communication stories! Amazing! Confounding! Guaranteed to make you snort! I’m kidding, just enjoy them. But it was fun to sound like an Old-Time Carnival Barker. 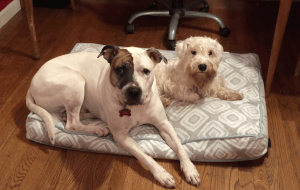 I hope you’ve been around animals long enough to know some of their behaviors don’t cut it in human society. I mean, greeting someone by sniffing their rear end? Nope. We humans aren’t down with that!

Let’s start with one of my most memorable stories – two male dogs humping each other in the house.

Not surprisingly, Heather found it gross. She didn’t want to witness it. When I checked in with the dogs, it seemed like play. They weren’t being assertive, they were just “doing their thing.”

Heather was okay with them playing the hump game, but just not around her. So I asked them to move their shenanigans out of her sight. They agreed.

And so we thought all was well.

Oops, I didn’t include John

But they still continued their scandalous behavior in front of Heather’s husband John. John was not thrilled.

In “hound” sight (pun intended),  I realized I had specifically asked Finn and Buddy not to do this in front of Heather. But I didn’t mention John.

So we had a second conversation. This time, it was a broader request! “Guys, humans want to watch dogs do this stuff in their house. Please don’t do it in front of Heather OR John.”

The dogs listened. And the humans were relieved.

Val worries that “Baby’s” not in the backyard in Virginia 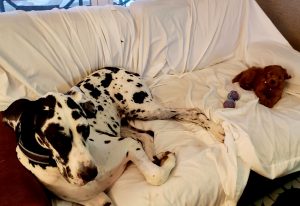 Pete has a wonderful Great Dane, Valentino. Pete sensed that Val wanted a doggie companion, so he asked me to confirm with Val. I got an excited “YES! YES YES! YES! YES!” from Val. Pretty clear that was a go.

So Pete and his family found an 8-month old pup, Brandy to bring home. He asked me to talk to Val about the importance of being gentle, not scaring Brandy and letting her play with him.

Additionally, I should ask Val to make sure Brandy didn’t leave the backyard. I explained that’s because she could get hurt or lost.

Pete reported all was going well with Val and Brandy. Val allowed Brandy to be her puppy play self, nipping and tugging, without responding with big-dog fierceness.

Recently, Pete’s wife and kids took Val and Brandy out for a walk. Val was quite distressed. His ears were laid back and he was hypervigilant.

They finally gave up on the walk and returned home when Val refused to move forward. This curious behavior was out of character for Val, who loved his walks.

The problem? Brandy was outside the backyard

When Pete got home from work, his family explained what happened. With his intuitive abilities, he asked Val what was going on. Val explained, “Baby was not in fence.” Clearly, my request got through.

After Pete knew what was up, he worked to refine Val’s understanding of what I had said. He shared that when either of the dogs were outside on a leash, Val doesn’t have to police Brandy’s safety. Val can enjoy himself. Pete told me Val let out a huge sigh at one point.

When I heard that, I connected to and apologized to Val. I told him I was glad Pete cleared everything up. Finally, I thanked Val for being such a good big brother to Brandy. 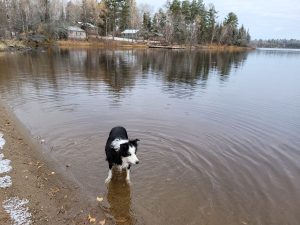 Jeanne and her husband planned to bring Piper with them on a road trip. From my understanding, Piper absolutely wanted to go with them. But she experienced anxiety about relieving herself in unknown territory. Of course, that made her people anxious.

I reminded Piper that she can relieve herself anyplace her people stop. In fact, other dogs do it and so can she. It’s part of the fun of going new places! She can leave her scent so other dogs know, “Piper was here.”

Jeanne reported that on their trip, Piper looked her right in the eye when she told her, “Maribeth said this is the spot.” And when Jeanne told her, “It’s time to leave your ‘Piper was here’ mark, girl,” Piper did her business.

The trip was a success!

After I had a communication session with the dog Piper, Jeanne reported that her pup was a bit skittish for a few days. She finally realized Piper was searching for me! Isn’t that wild?

Now, I always picture animals coming into my house when I have a session. But maybe I “travel” to their house, too! My mind just boggled itself into a pretzel.

Hope you enjoyed these stories –  I sure enjoyed sharing them.